Define the problem and you have the solution! 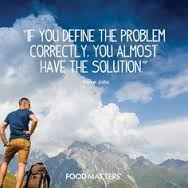 This quote is relevant to most aspects of life but has particular relevance to health professionals.

Have you ever been to a doctor feeling unwell but when all your blood tests come back within the right parameters you are told that you are ok and perhaps you need to reduce your stress, lose weight or be more positive?

What if you have tried all these things to no avail? How many people end up walking out with an antidepressant script or some medication that they didn’t really want?

There is always a reason behind why you feel like you do and sometimes it can be detected by a clever doctor doing more in depth blood work but sometimes that will not be enough to accurately diagnose the problem. This is where functional pathology testing holds real value.

Functional pathology encompasses a range of gold standard laboratory testing procedures that hone in on specific metabolic, hormonal, biochemical and functional states of health that a standard blood test is unable to measure.

Yes, functional pathology testing does involve more out of pocket expenses initially but I don’t know one patient who doesn’t want to see clinical evidence of what is wrong with them. This also allows specific supplements to be prescribed based upon the results and gives both the patient and the practitioner a good knowledge of what they have to do and what time frames they need in order to achieve wellness.

As an example, if a patient presents with persistent headaches there is a whole bunch of reasons why this could be so. After all, a headache could be caused from a number of issues such as poor liver detoxification, adrenal fatigue, methylation issues, energy pathway issues, hormonal imbalances, nutritional problems or environmental exposure to solvents or other toxic products.

Just like traditional medicine, naturopathic practitioners can prescribe supplements that they think will relieve the headache but is the CAUSE of the headache being addressed? If not, then the cause will remain and any treatment is purely band aid.

Another example of the value of functional testing is in patients who experience reactions to foods. Traditionally, elimination diets were used to detect food intolerances/reactions. These are diets that are restrictive and are often difficult to adhere to. Patients can spend months eliminating and reintroducing foods to determine what may be reacting with them. A simple IgG /IgA food test tells you everything you need to know in about three weeks (which is the turnaround time for the test to be performed and the results to be released).

Again, if you define the problem correctly, you almost (or do) have the solution!”